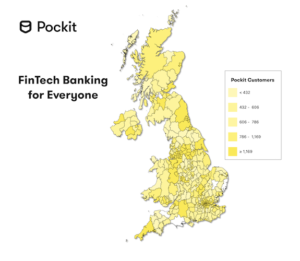 Why People Turn to FinTech When Bank Branches Closes

Falling out of love with banks

Right from the beginning, Pockit was created to provide vital banking services to those who had been neglected or underserved by the traditional banking system.

In recent years people have understandably become disenchanted with the main high street banks, whether it’s because of the financial crisis or the mis-selling scandals that followed.

Many chose to stop using banks at all, such was their break down in trust in the financial system. Others believed that the high street banks didn’t have their best interests at heart. Indeed, as our research reveals, big banks have begun abandoning the poorest in society who need the most support. This is where Pockit fits in — increasing competition in the banking system and providing a home for those who want an approach to banking that really works for them.

“as our research reveals, big banks have begun abandoning the poorest in society who need the most support”

We’re proud that our customer base is spread right across the country appealing to people of all ages and incomes. Unlike other FinTechs who often target millennials in London, we are unique in actively seeking to give access to banking to those who have been rejected by high street banks. Pockit now has over 500,000 customers, over 400,000 of whom are outside the M25. Indeed, the average age of a Pockit customer is 39, with over 25% of our user base living in the North West and West Midlands.

Since 2010, 990 bank branches have been shut in the 10% most deprived local authorities in England, whilst the richest 10% have only seen 230 close. On top of this, the poorest areas have lost a far higher proportion of their branches than the most well-off postcodes.

“Since 2010, 990 bank branches have been shut in the 10% most deprived local authorities in England, whilst the richest 10% have only seen 230 close…it is deeply worrying how many of these closures are focused on the poorest areas of the country”

As a digital current account provider, we understand why banks are taking the decision to shut branches. However, it is deeply worrying how many of these closures are focused on the poorest areas of the country. Coupling this with the Treasury Select Committee in Parliament demanding that banks do more to make basic bank accounts more accessible, it suggests that lenders prefer serving the most well-off rather than the most in need.

Pockit is stepping in to fill the void

When we discovered this discrepancy, we looked into our customer data and found that over 100,000 of our users live in one of the top 10% poorest areas in England where nearly 1,000 branches have closed in the past eight years. That’s 20% of our customer base. This told us two things: first, that we are providing a real alternative for those who are fed up with the traditional banking system; secondly, more and more people are becoming increasingly comfortable with using a digital current account provider rather than a brick & mortar bank.

“as big banks shut up shop, Pockit is there to give customers the banking experience they both want and need”

A recent FCA report supports our hypothesis. It found that an average branch closure leads to a 7% increase in the uptake of mobile banking. This means that as big banks shut up shop, Pockit is there to give customers the banking experience they both want and need. However, the report did note that the adoption of digital banking was minimal amongst the over 60s, which is why at Pockit we’re working hard to ensure our service is as user friendly as possible — whatever your age or technical abilities.

We take our responsibility to help people better manage their money very seriously. We know customers want different things from their bank, which is why we created the Pockit Product Portal to give people the chance to tell us what’s important to them and ensure we create a banking experience that works for you. And whether you are young or old, rich or poor, tech savvy or a tech newbie, customers will always be at the heart of what we do.