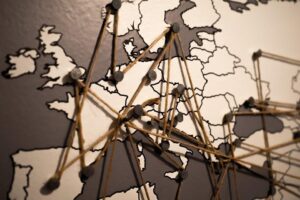 The Future of Startups is in Europe

Europe’s startup scene has long existed in the shadow of Silicon Valley, which for years has gone unchallenged as the world’s number one startup ecosystem. It’s been hard not to envy the Valley’s ability to raise mountains of funding, suck in world-class talent and roll out a conveyor belt of world-beating companies. But, dare I say it, the balance is tentatively starting to shift, with a plethora of new and exciting tech hubs rising up all across Europe, and global trends finally shifting in our favor.

The first half of this year broke the record for tech investment in Europe with €19.2 billion invested across Q1 and Q2. “Mega rounds”–once the preserve of the U.S. and Asia—are also on the up in Europe, with rounds above €100m driving most of the recent growth—26% in Q1 and a massive 45% in Q2. And while Europe’s numbers might still pale in comparison to the U.S., the gap is closing fast, with mega-rounds in the U.S. falling–at least for the moment. Meanwhile, we very nearly matched the U.S. in terms of exits of VC-backed companies last year–$107 billion to their $136 billion.

We take it as given that Silicon Valley is the worldwide capital for startups, but there is no good reason why it should be. European startups have direct access to the world’s largest economy, of 500 million people and a GDP of €25,000 per head. Europe is also arguably a better platform to reach other markets around the world, including rapidly growing emerging markets in Africa and Asia. The EU is the top trading partner for an incredible 80 countries, compared to just 20 for the U.S.

…and a talent pool to match

World-class companies are created by a combination of brains and technology, and Europe has more than enough of both to compete on a global scale. The continent is home to some of the leading tech and engineering universities in the world, including Oxford, Cambridge and Imperial College in the U.K., ETH Zurich, and Delft University of Technology in the Netherlands. We also have more developers, numbering 5.7 million, compared to 4.4 million in the U.S.; up 200,000 in the last two years.

Entrepreneurship is increasingly recognized as a legitimate career choice here, with bright MBAs choosing to start a business rather than climb up the usual corporate ladder. Furthermore, as the ecosystem becomes more established, we’re beginning to see a growing number of serial entrepreneurs come through, with the experience and funds to build even bigger and better businesses second time round.

And when it comes to building a team, Europe also has advantages for accessing and attracting talent, particularly since President Donald Trump’s recent crackdown on immigration into the U.S. Not only do EU countries benefit from freedom of movement across the continent but also increasingly relaxed rules on recruiting skilled talent from further afield. Less competition means salaries tend to be significantly lower than the U.S., particularly in emerging hubs, plus European employees are often more loyal, making it easier to establish a team and culture quickly.

New and existing hubs on the rise

Silicon Valley doesn’t have a monopoly on solving massive digitization challenges, which are impacting all industries and all types of companies, all around the world. Consequently, technology solutions are being invented and built in a growing number of European locations, made easier by the spread of information and ideas, and the decline in the cost of building a company.

Previously dominated by London, Paris, Berlin, and Stockholm, startups are now being originated all over Europe, creating a powerful interconnected ecosystem. Upcoming hubs, including Copenhagen, Barcelona, Dublin, Lisbon, Oslo, and Tallinn, are all growing rapidly and starting to attract investment, with plenty of room to grow. In fact, there are 15 European cities with professional developer populations of 50,000+ that have seen less than $1 billion in total capital investment since 2013, representing huge opportunities for the years ahead.

With all this potential, there is no reason why European startups can’t match Silicon Valley. But we still need more founders to match the ambitions of those across the pond. We’ve seen too many founders in Europe sell up to U.S. or Asian companies, rather than taking their business to the next level themselves. Things are changing, with a new ’entrepreneur by design’ generation of founders bringing a level of ambition above and beyond what we have seen in years past. We now need this to become the norm, so that the default is a desire to build global champions and expand abroad quickly.

Funding is also an issue because, while the numbers are increasing, Europe’s VC sector still doesn’t attract big institutions, such as pension funds, endowments, and corporations, in the same way that they do in the U.S. Here in the EU, a huge proportion of startup funding still comes through government participation, through grants, soft loans and venture investing. This is great, but more private capital participation is desperately needed, particularly in the earlier rounds from Seed+ through Series B.

In contrast, US institutional LPs have a greater propensity to take on venture risk and are more comfortable with the return profile offered by VCs. A better understanding of the sector means they are more willing to provide ‘patient capital’ to venture funds and wait for up to 10 years before realizing a return. This is one of the primary reasons why there is still such a huge funding and valuation gap between the U.S. and Europe, with research by GP Bullhound finding that unicorns in Europe are typically valued 18 times their revenue, compared to 46 times in the U.S.

U.S. investors are looking to Europe

U.S. VCs are realizing that investing in Europe not only gives them the chance to diversify their portfolio but also ensures they don’t miss out on some of the next generation winners being created here. One recent example is U.K.-based Checkout.com, the global payment solutions provider, which just completed the largest-ever fintech Series A in Europe– $230 million–in a round including U.S.-based Insight Venture Capital and Endeavor Catalyst. Insight Venture Partners also recently invested in Germany’s N26, the challenger bank, in a Series D of $300 million.

And cash isn’t the only benefit of these deals for the startups involved, as they also provide valuable knowledge and expertise in conquering the all-important U.S. market, something that European startups have frequently found it hard to do. U.S. VCs also come with unrivaled knowledge of how you build unicorns and complete successful IPOs. This kind of experience isn’t non-existent in Europe, but it is harder to come by, particularly in less developed hubs. More U.S. cash coming in also means we see more money recycled through European entrepreneurs.

On the downside, for startups taking U.S. investment, it can sometimes mean moving the business overseas or constitute a “soft” takeover through later-stage investment. In which case, ownership has ceased to be in European hands. And crucially, U.S. investment is currently limited to de-risked propositions in Series C onwards, which means there is still a big funding gap from Seed+ through to Series B. This reduces Europe’s ability to funnel through those promising ideas at an earlier stage.

Venture as the driving force

Europe has an unprecedented opportunity to make its mark on the global tech scene and challenge the hegemony of the U.S. and China. We have the talent, we have the market, we have the ambition and we are very nearly there with the funding. Venture Capital is key, and encouraging more institutional investors to get involved, ensuring the support is there in those early-stage rounds to spot, encourage, mentor, support and drive European tech entrepreneurs. Once we fill that gap—watch out, Silicon Valley.