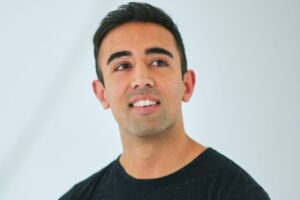 Here’s Partner Alex Mann, discussing his journey as a venture capitalist, approach to investment, the importance of entrepreneurship in solving society’s biggest problems, and the sectors where emerging innovations could have profound implications for how we live our lives…

How did you get started in your career? Was it always your intention to get involved in the investment world?

Not at all. In fact, I spent some time doing internships at large financial institutions, and I hated it! I found it a very narrow experience.

So after I’d completed my academic studies, I ended up moving to Mexico to work for an eCommerce business. I wanted to see the world and try my hand at a few other sectors outside of finance. It turned out to be an unbelievably valuable experience. I was given a chance to run their operations in several LatAm countries, working into Carlos García Ottati, the brightest business mind I’ve ever encountered and now founder of multi-billion car marketplace Kavak.

On returning to London, I started up a company called Pronto, with the mission of  developing the lowest cost food manufacturing and distribution infrastructure. We were growing strongly eclipsing £150k/ month in revenue, but we messed up the politics of raising a funding round and so the business died. By the time I met Concentric, my experience of interacting with VCs had been rather dreadful.

Given this, how did you first get involved with Concentric?

I was introduced to Kjartan and Denis by a mutual acquaintance. They struck me as honest, straightforward and deeply decent people who genuinely cared about the founders they invested into and were working in VC simply because they loved it.

Based on my earlier experiences, I recognised that it could be useful for a VC to have someone with my operational and entrepreneurial experience – at the time this was not common at all – and besides, the idea of building a VC fund from scratch was exciting. I had no idea what this entailed, and I was interested in the chance to approach problems in a more considered and thoughtful way.

Describe your role within the organisation. How does your approach complement the rest of the Concentric team?

I think my team colleagues enjoy the fact that I have a unique set of interests and a way of looking at the world that’s less conventional than many within the industry. I spend most of my time figuring out what sectors we should be investing in and this requires you to have reasonably keen observations about the world around us.

Why do you think entrepreneurs are particularly well-placed to solve significant societal challenges?

Businesses are just vehicles we use to organise people to solve problems. So are governments, but the customer of a government organisation is often not the citizen or individual, it’s the bureaucrat in charge of distributing funding to the service provider. I find that the incentives are much more aligned with an individual’s interest in the private sector because there is a direct feedback loop between the business and the end-user of the service. This is why the private sector provides a higher quality of service in almost every conceivable scenario and why government-run products and services are never as good.

That said, there is a clear problem with large private sector organisations in the modern world spending most of their time and resources entrenching their position rather than improving their products and services. Entrepreneurs help break that cycle, and today, you need fewer resources than ever to get started. With a good idea, a few laptops and some limited capital, you can build a product that reaches millions of people – and it’s this leverage embedded in digital technology that VC exploits.

And can startups still solve these problems once they’re part of the establishment?

The question for every fast-growth technology business is, once you’ve made it and achieved unicorn status, are you going to continue embracing new technologies or try to entrench your position and block them?

When you look at Big Tech, for example, a lot of these companies look as though they’re out of ideas and stagnating. They’re sitting on vast amounts of capital that isn’t being deployed, and that’s usually a sign that they don’t have viable projects in which to invest. It’s particularly astonishing given the cash sitting there is subject to c. 15% inflation per year!

Amazon is the exception because it continues to externalise its products. Whenever Amazon builds a tool, they externalise it to the wider market, meaning that the feedback loop driving innovation remains intact, and that they turn a cost centre into a revenue centre. It’s also a company that still embraces new technology – the Amazon Fresh store is the first supermarket innovation in decades. Will Amazon be accepting cryptocurrencies soon? I wouldn’t bet against it.

What have you learned from your experiences working with Concentric’s portfolio companies through the Covid crisis?

So I’ve found that, where startups have smaller boards, they are able to operate more nimbly when the situation demands it. At the start of the pandemic, the companies that reacted most quickly – recognising the severity of the Government action and its impact on consumer behaviour – tended to be the ones that came out on top. This wasn’t just about cost-cutting – it was about moving at pace to understand how products could be designed to suit the new paradigm.

Also, founders shouldn’t shy away from calling emergency meetings if there’s a problem brewing. Good dialogue with investors is essential during tricky periods, especially since most of the work gets done outside of the meetings themselves.

Are you worried by the number of businesses that relied on government support through the pandemic?

I’m generally quite concerned about the role governments are playing in everyone’s lives. The State is growing larger and more unwieldy, more demanding and controlling, more lavish and yet seemingly perennially broke.

It’s very difficult to run a business when you have random government diktats in all areas of life – as we’ve experienced during the pandemic. There have been government subsidies in all areas of the economy, each with different amounts, different caveats and provisos. It’s the State deciding who gets bailed out and who doesn’t and the ‘worth’ assigned to each sector. It distorts markets and it’s not a sustainable way to build a dynamic economy.

Do you think this poses a threat to entrepreneurialism?

In any given society, there’s a continuum from free markets to authoritarianism, and all societies exist along this continuum. I believe that the free market is the most effective check we have on political power. If we continue along with the current trend away from free markets, the consequence is that you end up with fewer markets open to competition, as they get captured by incumbents who inevitably cosy up to government.

But it’s also a question of the money supply. We’ve had artificially low interest rates and unlimited money printing for an extended period, and this leads to businesses getting built that shouldn’t get built, because the capital on which they borrow is artifically cheap. This scenario isn’t good for the entrepreneurs building legitimate, sustainable businesses because they’re having to compete against businesses that shouldn’t exist in the first place.

What excites you most about the new Concentric Fund?

We’re looking at deploying capital into a range of compelling sectors and opportunities. The space sector has tremendous potential; so too does Bitcoin infrastructure. We see Bitcoin as a transformative technology akin to the internet – a new monetary standard that the world will eventually move towards out of necessity, so we’re actively looking at infrastructure projects building on the Bitcoin network. We will in fact be launching a dedicated fund focused on Bitcoin infrastructure, Timechain.

Beyond these areas, there are still vast segments of the economy that just aren’t leveraging technology at all, such as SMEs. This is true both in the UK as well as across Europe.

We also see huge technology innovation at the frontier of proactive healthcare. It’s crazy that our entire health system is geared towards helping people once they get sick, rather than preventing sickness from happening in the first place.

You studied physics at university. Has your academic background influenced your approach to investing?

Well, I’ve certainly learnt not to be impressed by anyone with a Cambridge or Oxford degree! Using education as a proxy for competence is a much overused marker across the Western world.

Physics is a useful subject, as it teaches you to reason from first principles. If you can do this, you’re better able to challenge some of the assumptions people routinely make about the world that are often incorrect. Conventional wisdom as espoused by ‘experts’ is increasingly useless, given the world is changing so quickly.

But alongside this, physics teaches you humility and to recognise the limitations of your knowledge. It’s interesting to observe investors with no scientific training pumping large sums of money into, for example, quantum computing. I wouldn’t feel comfortable doing this and I’ve written a paper on quantum computing!

You mentioned space earlier. Is your interest in this sector also born of your love of physics?

Space has always been a massive interest of mine. It all started with Star Trek – the only television show that presented a genuinely optimistic view of what humanity could achieve.

As a species, we’re explorers. Humans flourish when we’re looking outwards. If we cease to explore, we start to look inwards and think in zero-sum terms.

Not only that, but space can solve many of the problems we have on our planet. If you want to reduce pollution, build factories in space instead. If you want to grow an organ, it may well be better doing it in zero gravity, where the organ won’t collapse in on itself (as it is prone to do in a high gravity environment on Earth). Utilising and exploring space will lead to scientific developments that significantly improve our day to day lives.

Are you frustrated by the recent criticism of the space sector emanating from COP26?

Climate summits have their place. Managing the environment is obviously a critical challenge, but these summits tend to get taken over by political posturing, and this ends up distracting from commercial applications like space which could be helpful in solving the problems we face.

We don’t get anywhere by branding the people who are lowering the cost of accessing space as climate enemies, or by viewing climate change purely through the lens of limiting humanity’s impact on the planet. We need to reframe our approach to climate change in terms of maximising human flourishing. Earth is here for us, we should use it to its fullest extent.

Finally, do you have any tips for founders looking to get started on their VC funding journey?

My early career experiences taught me about building businesses capable of scaling aggressively – moving fast and making things work in less than perfect circumstances and with limited resources. This is a vital consideration for every founder. Investors are typically looking for 3x or 4x year-on-year growth, and designing a company capable of achieving this without fatal missteps is very difficult. So it’s worthwhile to have someone on your team who already understands the various pitfalls you’re likely to encounter.

I also think there’s a risk to doing everything remotely. Remote working was helpful for a while during the pandemic, but time in person is extremely important in an early-stage startup, where you need to create energy with and build trust in the person next to you.