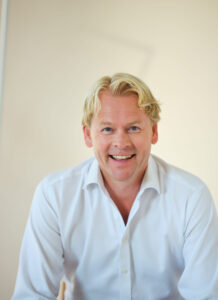 We’re catching up with each member of the team about their individual journeys in venture capital and the secrets to success. Here’s Co-Founder Kjartan Rist, discussing why strong relationships are still key to VC success, the importance of building teams from diverse backgrounds, and why founders should never overlook the value of being a good salesperson…

What first drew you to the VC world?

It was while I was at business school, attending lectures on entrepreneurship and innovation. I’m a generalist, both in terms of my skillset and interests, and I didn’t want to be tied purely to one company, so the VC profession looked as though it would play to my strengths. At the time, I was having conversations with a few peers who were looking to create a fund, and before I knew it, I’d become a co-founder of DN Capital.

How difficult was it moving from the lecture theatre to the real world of VC investment?

You can’t prepare yourself for a VC career purely through books or lectures. These will give you insights into the technical and legal aspects of the industry, but it’s so different to the reality of meeting companies and building relationships with founders. The important thing is to become engrained in the venture system and experience how the dynamics work. It’s an apprenticeship game – you can’t really make any shortcuts.

Remember too that this was 20 years ago. At that time, VC in Europe was in its infancy. It wasn’t a sought after industry – in fact, a lot of our time was spent talking to entrepreneurs trying to explain what VC was! The industry has moved on leaps and bounds since then.

Which experiences have been most instructive for how you approach investment today?

At DN Capital, one investment that didn’t work out so well was More Magic. This was a mobile payments company with good technology, sound management and a decent investment case. The problem was that the timing was wrong – it was too early, and mobile payments wouldn’t take off until the iPhone emerged. The experience showed me the importance of timing and market maturity when investing. If the market isn’t ready, the technology won’t catch on. Venture is a long game, and you have to be willing to ride it out – but if it takes too long, capital and liquidity will eventually dry up at some stage.

To give a more positive example, we invested in Frontier Car Group in the early days of Concentric. We got involved slightly later than we’d have liked, but despite being one of the smaller investors, we were able to bring unique relationships, skills and perseverance to the table and make a real difference to the company.

Is this what you mean by being an ‘activist’ VC?

Yes, exactly. I’ve taken this approach since day one – a desire to actively work with the companies in which we’re investing. As I grew more experienced, I started to see a gap in the European marketplace where existing VCs weren’t adopting a value-add mentality. My Co-Founder Denis and I realised that we shared a similar outlook on this issue, so we formed a partnership and got to work.

And how did you go about assembling the Concentric team?

It took us a while to arrive at the current team. Our CFO Mark was brought in near the start, but with our analysts, junior team members, operations, I’d say we went through about three iterations to get where we are now. You always want to bring in people early who’ll be able to go on a journey with you, but as the organisation evolves and grows, you start to see a need to bring different profiles and personalities onboard.

How do you describe yourself, and how does your personality influence your VC approach?

I’m a positive person, an optimist, and I’m very curious about people, business, politics, economics, the world in general! I’m a long-term thinker, and I’m also very resilient, so my attitude is that there are no problems we can’t handle as long as we’re approaching them in the right way.

I get on well with lots of different types of founders. Their personality is less important than their willingness to cooperate. Some entrepreneurs are extremely closed off, while others play games or make every decision a political one, and I have no time for this. I’m a straight shooter, and I want to work with people who are the same. In venture, there will always be problems – whether they’re to do with product, people or money. We can deal with everything, but we need information and cooperation from our founders.

What excites you most about the new Concentric Fund?

It’s very much an extension of the work we did in Fund I, with a team that has now worked together a long time and learnt a lot. We’re very good at building partnerships, and we’re even more sure now about the type of deals we want to target.

But there’s also some new thinking for Fund II. Europe is changing, VC is changing, and we need to take a more refined approach to continue adding value for entrepreneurs.

With deals getting bigger, more global, and more investors involved, how can you maintain your activist approach?

While the overall volume of European investment is rising, it’s concentrated on fewer companies and at a later stage, so there’s still a funding gap in our sweet spot: late Seed and Series A investment. Beyond this type of activity – where we have a proven track record – we will also team up with like-minded investors to do later-stage deals, assuming there’s an opportunity for us to add value.

The updated Concentric branding is centred around the philosophy of ‘united by difference’. What do you mean by this, and why is it important for venture investing?

Across the business world, much attention has rightly been given to diversity issues in recent years – gender, race, sexual orientation. But there’s been comparatively little focus on diversity of thought. We believe it’s essential to assemble teams with different backgrounds, from different standing points, and with different ways of thinking. This is so much more valuable than a team with a uniform view of the world, cut off from outside influences. We want to encourage thinking that challenges our beliefs and challenges the market as a whole.

How important is it for investors to get out and spend time with their portfolio companies?

Technically, a lot of VC activity can be carried out from behind a desk. But it’s no substitute for travelling and meeting people. Our job is about relationships and partnerships, and these are very hard to nurture via Zoom calls.

Seeing our founders several times a year, experiencing time in the room with them, having a drink with them is the best way to build these partnerships. Even things like seeing people’s offices can give you a much stronger feel for a company and its prospects.

With some investors, it’s more about volume than quality of relationships, and if that’s your approach, you’re better off sitting at a desk taking eight remote meetings per day.

It sounds as though many investors are still not embracing an activist mentality?

Part of the problem is that there’s a romantic view of VC – this idea that you spot a company, put money into it, and then sell it to Big Tech or take it public a few years later. The VC industry is much tougher to succeed in, although the job is made easier when the markets are going up, up, up.

If you’re a young VC now, you’ve probably spent your entire career working in this climate. However, when the markets eventually turn, this will show who has learnt their craft as a VC, because a different type of skillset – and a lot more proactivity – will be needed.

What tips do you have for founders looking to get started on their VC funding journey?

Firstly, you need to be able to communicate the topline vision for your business clearly. Investors won’t be looking for a 100-page business plan. What they want is to get a clear sense that you’re addressing a market that’s ready with a product that’s scalable.

Secondly, you need to be a good salesperson, not just when speaking to the VCs, but to customers and employees too. Your dream hire might have to take a salary cut to come and work for you. They’ll only do this if you’ve really sold them the idea.

Thirdly, having a referral from someone that has already vetted you is incredibly helpful. If we’re getting other investors telling us that you’re worth talking to, we’re far more likely to engage. It doesn’t have to be someone who has already put money into your business – it could just be someone you know or someone you’ve worked with before.

Finally, if you weren’t working as a venture investor, what would your dream job be?

Well I do think this is the best job in the world. I get to work with great colleagues, see and meet some of the brightest people in the world, and get to help them fulfil their dreams. But if I wasn’t in the VC industry, I’d love to be the managing director of a football club. And I’d take pretty much the same approach as my current job – identifying a promising club and looking at how to help it achieve its potential.