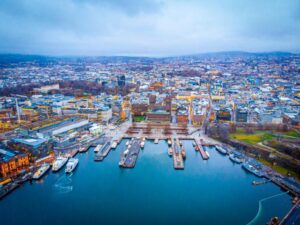 Can you tell us about your background and why you founded Concentric?

I was born in Norway and educated in the UK. After finishing my degree at Bath University, I worked at a couple of financial institutions in London before becoming one of the founding team members at DN Capital. From there, I went on to make a number of private investments and to co-found a merchant bank called Korral Partners. Then in 2013, I met my current Co-Founder Denis Shafranik. Although we came from somewhat different backgrounds, we shared the same vision of starting a venture capital firm focused on early stage European software companies.

At the time, Europe was still at a nascent stage but becoming ripe for venture investment. Not only were more tech startups being founded, the entrepreneurs behind them were more skilled than those who came before them, with some having the advantage of being repeat founders. All of that had an incredible flywheel effect that helped create the thriving tech ecosystem we have today, which in turn made it the perfect time to start a European-focused VC fund.

How have you positioned Concentric in the market and what do you see as its key differentiators?

The world faces massive challenges today that require innovative technology solutions — that innovation will come from entrepreneurs. That’s why we back founders who are using software to address problems in industries like insurance, financial services, healthcare, logistics, and manufacturing, all of which have been slow to embrace digitalization and therefore aren’t as efficient or effective as they should be. At its core, Concentric invests in companies that are bringing software and other technologies to traditional industries to disrupt the status quo and help tackle some of society’s biggest problems.

Beyond that focus, an important part of our differentiation is the practical value add we bring to all of our portfolio companies. As part of our due diligence, we always assess where we can be helpful to the business. Depending on the company, that might include getting involved in commercial, governance, or reporting matters, or issues pertaining to HR, board structure, go-to-market strategy, M&A activity, or fundraising. While this approach is commonplace in the US, it’s historically been less of a focus for VCs here in Europe. At Concentric, we call it Activist Ventures and we’ve been one of the first in this market to embrace the idea that being a top VC goes well beyond just writing a check.

How has the market shifted in 2022 in the face of rising inflation, recessionary fears, lower valuations, and geopolitical uncertainty? And how is Concentric adapting?

It’s been a strange year. Since coming out of the pandemic valuations have dropped and the markets have rebalanced, which has led to a fresh set of challenges. But after several years where too much cheap capital was being deployed too quickly, I think we needed that reset because it has allowed us to largely avoid what could have been a far worse scenario. The shift has also resulted in fewer capital providers here in Europe. We’ve seen hedge funds and private equity funds dip out of the venture market, while many American and Asian investors who had previously been very interested in Europe are now refocusing their attention closer to home.

One of the biggest changes though is the end of what I like to call “nightclub term sheets,” where VCs and founders might happen to meet and hash out a term sheet on the back of a napkin right then and there. Today, by contrast, there’s a renewed focus on analysis and diligence and on building strong relationships between the venture fund and the entrepreneur. Ultimately, that additional craftsmanship benefits both sides of the transaction.

Having said all of that, our strategy has remained largely unchanged. We managed to avoid the sectors that became hyped up during the pandemic and whose valuations have since come crashing down. Our focus continues to be backing well-funded fintech, insuretech, and healthtech companies, as well as companies that are driving innovation in logistics and industrial applications.

Can you tell us a bit more about some of those areas and where you plan to deploy capital in 2023 and beyond?

Sure, I’ll give you an example from the industrial sector. There are roughly 10 million factories around the world right now, all of which have some sort of ERP system in place. And yet, only about 3 percent of those factories have any business intelligence layered on top. That means that the remaining 97 percent don’t have access to data-driven insights around issues that are critical for optimizing production, whether that’s how much they’re spending on raw materials and other inputs, the amount of energy they’re consuming, or whether or not they’re staffing their factories in the most cost-effective way possible. So one of the opportunities we’re very interested in is using software to help modernize millions of factories to make them faster and more efficient operations.

Of course, plenty of other industries need to modernize as well. Healthcare has to adapt to meet the needs of an aging population at a time when there are fewer people paying taxes to support that care, and fewer medical professionals around to provide it. There are big opportunities in terms of personalized medicine and finding better ways to communicate. Meanwhile, the insurance industry is known for its lack of transparency, endless paperwork, and clunky products  all of which can be addressed with the right technology. We’re investing in companies with advanced software that help modernize industries like these so that they’re better positioned for current and future needs.

What are some of the differences you see between the venture capital and tech ecosystems in Europe and North America?

The first thing you have to understand is that when it comes to VC, Europe is 50 years behind the US. Back when I first started talking to entrepreneurs here in the early 2000s, I often had to explain what venture capital was because most of them simply weren’t familiar with it. There also wasn’t a culture of entrepreneurship like the one that exists today. In fact, it’s really only been within the last decade or so that being an entrepreneur has come to be viewed as an accepted profession here. Before that, graduates from our top universities were much more likely to go into a specific industry or work at a bank or consulting firm rather than start their own business.

And how are things today?

We’ve obviously come a long way since then and mindsets have shifted, but there are still massive differences between Europe and the US. The range of LPs we have access to as VCs is just one example. In the US, VCs have long had numerous sources of investment, including endowments, family offices, and pension funds, among others. Here in Europe, by contrast, approx. 60 percent of our capital comes either from state funds or the European Investment Fund that may be more interested in job creation and advancing R&D than making a profit. There are very few pension funds investing in venture and European family offices are slow to come on board, so we’re definitely lagging behind in terms of funding options.

In addition to having a more mature tech ecosystem, the US has also historically had the lion’s share of breakout companies that became huge winners and whose leadership subsequently went on to do other great things. I’m talking about companies like Cisco, Intel, PayPal, and LinkedIn, where the founders and others across each business parlayed those experiences into starting new businesses. That’s something we’re just starting to see happen in Europe with the teams from companies like Spotify, Skype, and Rocket Internet going on to launch new ventures.

So while the US remains ahead of Europe, we’re closing the gap. Europe is home to nearly 350 unicorns that are spread across more than 20 hubs all over the region, including in markets you might not expect like Bucharest, Tallinn, Oslo, and Gothenburg. Young founders are seeing that you don’t have to be based in San Francisco, Berlin, or London to start the next big company. And ultimately, success breeds success. Anywhere a new unicorn emerges you can be sure that there will be a fresh crop of founders ready to start their own companies. And these founders will have already gained the knowledge, experience, and connections to do so successfully. We also have the advantage of having more PhDs in STEM subjects, more developers, and cheaper labour costs.