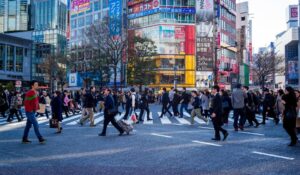 As the world’s economies awaken from their period of enforced hibernation, business leaders and entrepreneurs all over Europe are being forced to look for new ways to get ahead in a global market predicted to decline by 5%.

Overreliance on China has become problematic and carries increasing risk. The recent ‘talent ban’ imposed by the US is further evidence of the country’s changing stance on overseas trade. To thrive in the post-COVID world, European businesses may need to expand their horizons.

Enter Japan, the third-largest economy in the world, with a pre-COVID GDP of more than USD five trillion. In 2019, the EU and Japan completed the world’s largest-ever trade deal, described by the European Commission as, “The most important bilateral trade agreement ever concluded by the European Union.”

But while the size of the EU economy is second only to China, trade between Japan and the EU currently pales in comparison to the USD 330 billion traded annually between the two Asian giants.

The upshot is that many European companies – particularly early-stage businesses – are missing out on a huge market opportunity. And for Japanese companies, many of whom have historically tended to focus exclusively on Silicon Valley and Israel, the missed opportunity is greater still.

The decline of Japanese innovation

Japan’s reputation as a pioneer has faded since the ‘lost decade’ of the 1990s.

A country once defined by Sony founder Akio Morita’s “innovate or die” mantra and a country responsible for breakthrough innovations such as the Walkman, robots, LED lighting, and even the pocket calculator, has struggled to develop a thriving culture of 21st-century entrepreneurship. Today fewer than one in five Japanese adults are involved in early-stage startups, one of the lowest rates amongst advanced economies.

Sticking to tried and tested solutions – from manual data inputting to a worrying reliance on fax machines – while discouraging individual creativity and risk-taking has led to Japanese enterprise falling behind both Western and Chinese counterparts. Where innovation has occurred (even today Japan is still third in the world for patent applications) it has often resulted in domestic-only solutions, a classic case of Galapagos syndrome.

Ren Ito, former CEO of Mercari Europe – the international arm of Japan’s first and only unicorn start-up – argues that, “To reignite its innovation aspirations Japan needs to distance itself from the obsession with homegrown start-ups, and instead look at how the country’s healthy base of established corporations can better invest in overseas companies and businesses.”

While this mentality shift may not come easily to Japanese corporates that are firmly rooted in traditional working practices and hierarchical structures, it’s getting harder and harder to make the case for maintaining the status quo given that Japan currently has the world’s oldest population, stagnant productivity, and increasing welfare costs.

As Ito, who in his previous life served as one of the negotiators for the Japan-EU Economic Partnership Agreement, points out, there is past precedence for the type of outward investment that’s now needed. “Japanese organizations and individuals have trillions of US dollars’ worth of reserves that are currently lying dormant,” he explains. “Just as Japanese manufacturers used to look abroad to high-growth markets to drive Japan’s export-oriented growth, there’s a clear opportunity to use some of these vast and underutilized surplus funds to purchase stocks in some of the fastest-growing tech start-ups outside Japan.”

Why Japan must innovate

Japan’s aging population isn’t just a challenge from a welfare perspective. Significant labor shortages could lie ahead for a country in which social mobility is limited and a longstanding fixation on lifetime employment is causing a brain drain of some of the country’s brightest tech talent.

It’s hard to see how these challenges can be resolved without great innovation around automation technologies capable of plugging the gaps. Similarly, as a nation that is still almost 90% reliant on fossil fuels, innovation in energy efficiency, security and sustainability must also form a key component of Japan’s future growth strategy. Finally, as the most advanced nation in the Far East, Japan has a vested interest in infrastructure innovation across the wider region, helping to ensure frictionless trade relationships with some of Asia’s most rapidly-growing economies.

Europe can be a source of inspiration and collaboration

Although European-founded organizations such as Skype, Spotify, and TransferWise are household names in Japan, and despite the exponential growth seen across its startup ecosystem, European startups haven’t received the attention they deserve from Japanese firms and investors. Instead, Japan has traditionally looked to the US and Israel for innovation inspiration.

Both countries have indeed done a fine job of encouraging entrepreneurship; they boast lower levels of regulation and working cultures fixated upon rapid growth, iteration at speed, and even ‘failing fast’. However, neither has a particularly strong record when it comes to collaborating with Japanese businesses. Silicon Valley startups are happy to take their money but rarely do these investments in US firms lead to tech innovations designed with Japanese businesses in mind. A US IoT startup, for example, is far more likely to team up with Cisco and IBM and target the US market than it is to team up with NTT, Toyota, or Fujitsu, irrespective of where its funding comes from.

In contrast, the European tech startup ecosystem is far more accustomed to this type of collaboration. For example, South African-based Naspers, one of the largest technology investors in the world, has relocated much of its business to Amsterdam to become Europe’s largest consumer internet group. Indian giants Tata Group and Wipro have both invested heavily in R&D across Europe in recent years.

Right now there are many examples of emerging European technologies, particularly within fintech, that could easily be developed in collaboration with – and adopted by – Japanese banking and insurance giants. Pre-COVID, these European startups were already more attractively priced and less prone to excessive valuations than their US counterparts. With the post-COVID world likely to make such investments even more affordable, this is the perfect time for Europe to make its case to Japanese investors.

Not only that, but compared to Japan’s home market, which is heavily-regulated and populated largely by ‘bread and butter’ corporations built upon the innovation-stifling Keiretsu holding model, Europe is home to one-third of the world’s top cities for startups and almost 6 million tech developers, far more than the US. The region has 17 of the world’s top 20 most socially mobile countries and has twice as many STEM graduates as the US. Germany alone welcomes significantly more international students each year than Japan; so too does France.

Europe is a place that offers greater diversity of both thought and background, and while work still needs to be done to ensure greater equality of opportunity across the tech ecosystem, the region is moving in the right direction – it has embraced the change mentality.

Despite being largely overlooked by investors beyond the EU’s borders, the conditions for driving innovation are far healthier in Europe than in the domestic Japanese market, and the European appetite for collaboration with Japanese businesses is far more pronounced than in the US or Israel.

Japan may be one of the world’s top five countries for R&D spend as a percentage of GDP, but right now it lacks the entrepreneurial culture to realize the true value of its investment. It has the capital to invest, and yet its organizational structures, business cultural norms, and incentivization approaches prevent local startups from flourishing. Bankruptcy laws have no limited liability, meaning that entrepreneurs and their families take on all of the risk. Venture Capital in the country is too corporate, funded by multinational giants to support their core business models rather than by agile independents focused on innovation and creative disruption. This type of underlying change will take time and, crucially, greater exposure to progressive outside influences.

All of this presents a clear opportunity for Japanese corporations both to invest in fledgling EU-based startups as well as using smaller European markets as test-beds for their own innovation, tapping into digitally native and highly literate local populations to pioneer new initiatives away from the conservatism of their home market. Europe offers both a direct and indirect pathway to growth, as well as providing a more accommodating culture for encouraging innovation.

For fast-growing European companies, Japan is rarely spoken of as a potential export market in the same breath as the US or China, even though there are manifest advantages to pursuing Japanese custom. Not only is it the world’s third-largest economy, and a country of more than 125 million residents with an average household income of circa USD 48,000 per annum, but many of the technologies already being developed in Europe look like a great fit for the Japanese market.

From health tech and green tech to mobility solutions, Japan needs to combine its tech leadership, IP, and R&D capabilities with greater access to innovation in these areas. By injecting European entrepreneurial culture and harnessing the emerging technologies currently being pioneered within the region, Japan will be far better placed to overcome its pending economic and societal obstacles.

The opportunity to foster a long-term partnership

While the 2019 EU-Japan trade deal signified a mutual desire for trade, investment, and collaboration, this desire must now be capitalized on as both territories step up their economic rebuilding efforts in the aftermath of the COVID-19 pandemic.

As Ren Ito explains, developing the EU-Japan relationship is an opportunity that makes sense for both parties, not just in the short-term but for years to come. “The overseas technologies that attract investments can be brought back to Japan to bring about more innovation through their application to Japan’s social problems, such as its aging society. Shifting from manufacturing to investment might just be the key to Japan innovating innovation itself.”