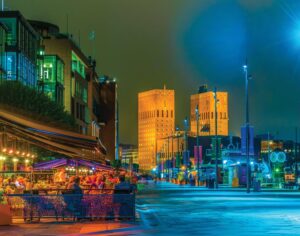 Decades of depending on the oil industry has made Norway one of the richest countries in the world. But the nation was forced to reinvent itself when the oil price crashed. Now Oslo is attracting more investors.

It’s the oil, dummy. Ask anyone why Oslo’s startup scene only recently came into its own and they’ll tell you it’s because petroleum dominated Norway’s economy since it was first discovered in the late 1960s. While the natural resource buried at the bottom of the North Sea has consistently placed Norway among the top ten wealthiest countries in the world, it’s also restricted the country’s innovation capabilities. “The technology in Norway has basically been focused towards obtaining and abstracting oil and gas resources,” says Kjartan Rist, co-founder of Concentric, a VC firm. As a result, the idea of establishing an entrepreneurial hotbed in Oslo was put on the back-burner.

That doesn’t mean Norwegians didn’t launch any tech ventures in the past. “If we look at the 90s, we had several big IT companies here in Norway,” says Jørn Haanæs, startup director at Oslo Business Region, the city’s initiative to support the startup ecosystem. It’s from this era that you can track success stories like Opera Software, a tech company sold to a Chinese consortium for $600m in 2016.

In many ways, it wasn’t unlike the scenes in Denmark, Finland and Sweden where the period saw startups take their first steps into the world of IT. But the sector collapsed after the dotcom crash in 2000. That coincided with the world oil price jumping from $25 per barrel to almost $150 per barrel between 2000 and 2008. And in a population of just five million, it’s hardly surprising that most innovative minds bet on the safe and rich oil industry rather than going at it alone. “So we had a handicap for years,” says Haanæs. That’s why, while Stockholm has birthed startups like Spotify and Helsinki has hatched the Angry Birds creator Rovio Entertainment, Norway’s startup culture has been lagging behind. Until now.