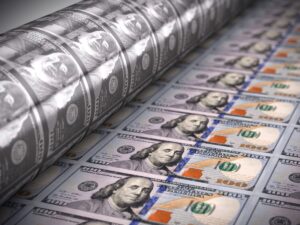 Modern Monetary Theory (MMT) has proponents in high places. Somewhat predictably given it entails unlimited government spending, Democratic nominee Joe Biden and Bernie Sanders are advocates. And whilst Donald and Boris are not ideologically wedded to MMT, it’s not like they are any better given the out-of-control deficits being run up right now. MMT would have us believe that governments can and should spend at will on all causes they deem desirable. Because governments have control of their currency, government spending should not be thought of as akin to a household budget. New money can simply be printed to pay for government projects and taxes manipulated to control the amount of money in the system and hence the inflation rate. This is symptomatic of a deeper cultural malaise, whereby we look to government to solve all problems and a power-hungry, increasingly extravagant yet perennially impoverished government is all too happy to oblige.

Make no mistake, MMT is a disaster. It’s crack cocaine for governments addicted to spending in order to placate a lazy and entitled western citizenry. Said governments, run by highly credentialed mandarins, have replaced enlightenment values of individual responsibility with their own cold and sterile version of the intellect that seeks to create a socialist utopia. A socialist utopia that they, of course, will be in charge of. And let’s be clear lest I be categorised as ‘far right’, sticking up for notions of individual dignity and responsibility is a classically liberal position.

Fortunately for politicians, the grandiose sounding MMT provides the intellectual cover for them to finance these regressive welfare states that absolve individuals of any sense of responsibility for their own actions. The message; we, The Government, are here to step in and solve all your problems. The result of this endless money printing — which through inflation is just another tax on the productive sections of society — is dead-end government vanity projects and a population completely and utterly dominated by the state. If the state is not directly employing individuals, they are subsidising our industries. In some parts of Northern England, above 80% of GDP is now made up of government spending. How much more government money must we inject into these areas before we acknowledge doing so is ineffective?

Fortunately for them, MMT allows politicians to avoid making the hard choices needed to break our collective dependence on government spending. They don’t have to choose what projects to green light, they can just do them all and therein lies its appeal. The population, by now thoroughly emasculated, get to feel a government fix is around the corner, and politicians get to offer those giveaways at elections.

The result on the actual free market is profound. MMT floods the markets with cheap capital, distorting capital stacks and making projects that should be unprofitable, profitable. The result is the propping up of zombie companies (companies where profits are less than the interest paid on debts) and the prevention of the redistribution of capital and talent. Seen through that lens, is it any wonder that growth in the West has been anaemic for decades? After all, how can investors deploy capital consistently and at scale in an environment prone to such distortions?

But all this should come as no surprise. In the upper echelons of society, Capitalist has become a dirty word. A synonym for rent-seeking, apathetic egoists who are just out to maximise their own individual wellbeing at the expense of all others. We’ve come to believe it to be a zero-sum game and not the engine of progress for all that it so clearly is. I’ve long observed how even Venture Capitalists in Europe are ashamed of the Capitalist in their job description, probably feeling prouder were it replaced with Socialist. A product of our youth indoctrination camps — the elite universities no doubt. Since that observation, the VC community begged the state to underwrite the tech sector post Covid and indeed the exchequer obliged, with the treasury having now in effect underwritten a significant % of the European venture sector through their Covid support scheme. Where will direct government support in the tech sector end, let alone other industries? As the late Milton Friedman wryly observed ‘There is nothing more permanent than a temporary government program’.

Shock therapy is needed. Many readers won’t even agree that direct government support of industry is not desirable, which illustrates how badly we have lost perspective as to what sort of government intervention should be welcomed or tolerated. The issues run deep and the more you look for it the more you will notice how Government dominates the paradigm of entire industries.

Take payments as an example, the cornerstone of our modern interconnected economy. Yet even here the distortions present due to government action are so fundamental to the industry, we have lost perspective on what the economy could look like without it. Through seeking to determine what their citizens can spend their own capital on, via which platforms, through certain companies only, in certain currencies only and from approved countries only, a whole host of companies have sprung up to manage the whims of politicians. Some, like protection from theft and fraud, are justifiable but many are not. The result is inevitably fees, inconvenience and time to move your own money from A to B. And so even in an area as visible as payments to the public eye, the whole industry owes its existence to government regulation. The capital deployed to manage these concerns is a direct tax on individuals due to arbitrary and increasingly complex government regulation. Think of the trillions in capital lost and wasted on such pursuits.

In our ‘status-through-credentials’ obsessed society, MMT is the vision of Oxbridge grads and Ivy Leaguers who think that their ideologically dominated degrees make them smarter than the market. And by the market, I simply mean a collection of individuals expressing their own free will to make choices they deem in their own best interests.

MMT is totalitarian in nature, but one done, the mandarins believe, to prevent the unnecessary suffering caused by natural market mechanisms that cause uncompetitive businesses to fail and recessions to occur periodically. What they fail to understand, is that these dips and recessions lead to healthy reallocations of resources and so become vital to driving progress. By attempting to put them off, they are building pressure in the system that in time will inevitably explode, creating a crisis greater in magnitude than any of those they thought they dodged. After all, the road to hell is paved with good intentions.