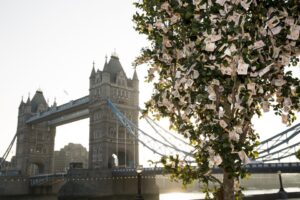 Modern Monetary Theory: A shared delusion that will destroy the economy

Alexander Mann for City Am

As Rishi Sunak announced another multi-billion-pound support package last week, most numerate people would have been boggling at the numbers.

How are we ever going to pay all that money back? Surely it means years of austerity, high taxes, or debt for our children and grandchildren to repay?

But there is a growing and increasingly vocal minority for whom such unprecedented government spending isn’t seen as an issue. Why? You just print more money, of course.

Modern Monetary Theory (MMT) is the idea that any government that issues its own fiat currency doesn’t need to balance its books in the usual way by raising taxes. Instead, new money can simply be printed to pay for government projects, and taxes manipulated to control the amount of money in the system and hence the inflation rate.

It would have us believe that governments can — and should — spend at will, on any and all causes they deem desirable.

MMT (also the initials, coincidentally, of the fabled “Magic Money Tree”) has gained proponents in high places. Somewhat predictably, given it entails unlimited government spending, the far-left US Democratic senator Bernie Sanders and socialist poster-girl congresswoman Alexandria Ocasio-Cortez are big advocates, and even middle-of-the-road Joe Biden seems to have come onboard.

More surprisingly, MMT seems to be gaining some credence on this side of the pond. Although few in the UK have explicitly supported it, the Conservative government’s current spending trajectory indicates that we are effectively already doing it.

And it’s not hard to see why. Unlimited government cash? It would certainly provide a convenient way out of a tricky situation.

But make no mistake, MMT is a disaster. It’s crack cocaine for governments addicted to spending in a society where people look to the state to solve all their problems.

MMT allows politicians to avoid making hard choices. They don’t have to choose what projects to green-light, they can just do them all. Therein lies its appeal. The population is reassured that a government fix is always around the corner, and politicians never have to look like the bad guys (as the Tories have this week with the fiasco over free school meals).

The result of this endless money printing — which, through inflation, amounts to just another tax on the productive sections of society — is dead-end government vanity projects and a population dominated by the state, turning to Westminster at every opportunity.

As for the actual free market, the impact is profound. MMT distorts capital stacks, making projects that should be unprofitable profitable, by propping up zombie companies and preventing the redistribution of capital and talent to more productive areas.

Thanks to less extreme forms of the MMT dogma, growth and productivity in the west have been anaemic for decades. How can investors deploy capital consistently and at scale in an environment prone to such distortions?

But as it gains in popularity, advocates begin to appear from unexpected quarters to cash in on the action. Even the venture capital community begged the state to underwrite the tech sector post-Covid — and the Exchequer obliged. The Treasury has now in effect underwritten a significant percentage of the European venture sector through its Covid support scheme.

Where will direct government support in the tech sector (let alone other industries) end? As the late, great Milton Friedman wryly observed: “There is nothing more permanent than a temporary government program.”

Shock therapy is needed. The fact that so many people today do not see why direct government support of industry is undesirable illustrates how badly we have lost perspective as to what sort of government intervention should be welcomed, or even tolerated.

MMT is totalitarian in nature, but its proponents believe it prevents the suffering caused by natural market mechanisms that drive uncompetitive businesses to fail and recessions to occur periodically. What they fail to understand, however, is that these dips and recessions lead to healthy reallocations of resources, and so become vital to driving progress.

By attempting to put them off, they are building pressure in the system, which in time will inevitably explode, creating a crisis greater in magnitude than any of those they thought they dodged.

The road to hell is paved with good intentions — and the fruit of the Magic Money Tree is poisoned.